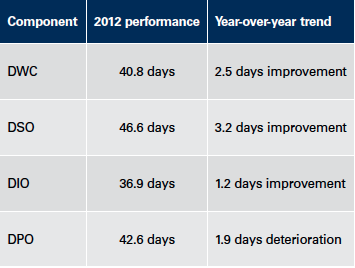 Days Inventory outstanding remains the largest single working capital improvement opportunity in the USA, while Europe the biggest opportunity is in A/R:

Concerns about sustainability of improvements

In both Europe and the USA REL have concerns about the sustainability of the working capital improvements.

In the USA REL have found that companies continue to struggle with maintaining or improving working capital performance year-on-year:

REL believe that their findings suggest that, in both regions, once companies enhance their working capital efficiency, focus is turned elsewhere and previous gains are lost or reduced.

CTMfile take: Focus on maintaining and improving working capital efficiency is vital in both bad times and good times. When good times return, then the focus should increase otherwise the disciplines will slip and cash will fly away as happened in the USA last year, and as UPS's Ernie Caballero predicted in April 2013.