A report from McKinsey shows that trust, communication and focusing on businesses models are linchpins of successful joint venture negotiations. Treasury has a role to play in these key areas.

One of the first things to address in any joint venture (JV) negotiations is the JV structure and business model, which accounts for 40 per cent of value at risk but just 20 per cent of the average negotiating time between potential JV partners, according to research by McKinsey.

The graph below shows how half of all meetings are spent discussing deal terms, yet these account for just 10 per cent of value at risk. This shows that JV negotiations are often inefficient in terms of how time is allocated compared to value at risk. More resources should be dedicated to the business model and structure. There is an opportunity for corporate treasury to make the case for greater involvement at the early stages of JV negotiation to ensure that decisions on structure and business models are properly informed by financial considerations such as regulations, risk management and cash flows.

Effective internal communication and trust is also one of the linchpins of successful JV negotiations. In their report McKinsey's authors, Eileen Kelly Rinaudo and Jason Roswig, write: “Negotiating JVs differs from negotiating mergers or acquisitions because the end goal is a sustainable, ongoing, trust-based relationship, not a one-time deal. Not surprisingly, a significant portion of our survey’s respondents indicated that the level of honesty and trust between the parent companies had a significant impact on the partnership’s overall success.”

While trust and communication reach far beyond the basic financials to the highest levels of the company and include honesty regarding business motivations, there is certainly a case to be argued that trusted, transparent financial data can form the foundations of good communication and trust between the two potential JV partners. 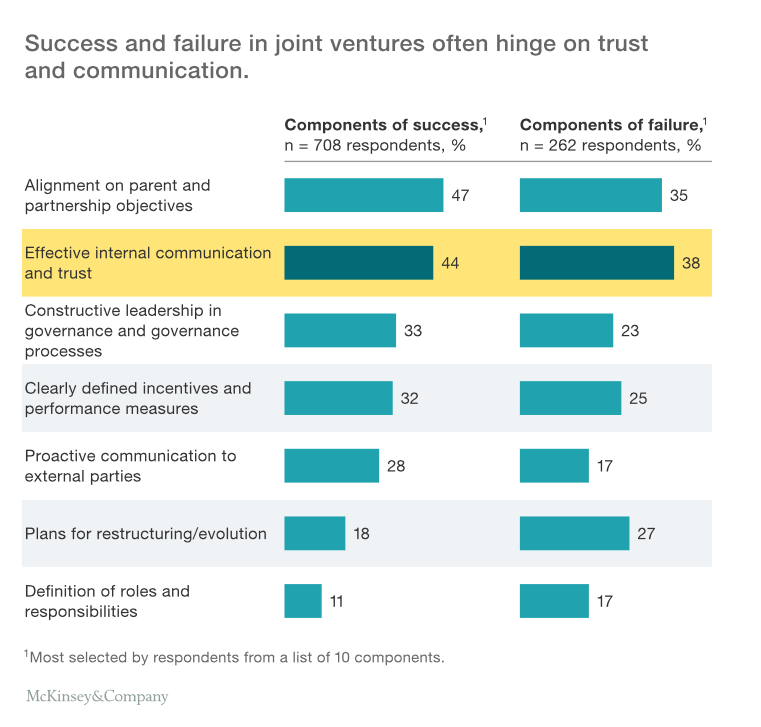 McKinsey's research also highlighted how many companies entering into JV partnerships do not have experienced negotiation teams, partly because staff members change and partly because many companies don't embark on that many JVs. Therefore there is a lack of standardised processes, which can also cause delays or hiccups along the road to partnership. McKinsey's researchers write: “Standardized processes are especially helpful once a deal is under way, when adapting and restructuring can strengthen a partnership and increase financial returns – as long as the relationship is strong and the process has clearly allowed for adaptation.”

In the past 10 years there have been more than 1,500 JV deals completed each year and 10 per cent of these were JVs with an initial value of more than $250 million. And the pace seems likely to increase, with two-third of executives interviewed by McKinsey in 2014 expecting to do more JVs in future.

CTMfile Take: Given the financial stakes involved in such partnerships, treasury should be playing an important role in negotiations, particularly at initial stages. Greater input on financial structures at the outset contributes to healthier partner relationships further down the line.

How to navigate the risks and seize the opportunities inherent in a merger, acquisition, divestment

Companies must wake up to risk of third party non-compliance