Many consultants believe that the natural progression / growth path for corporate treasury departments is to become a strategic treasury: 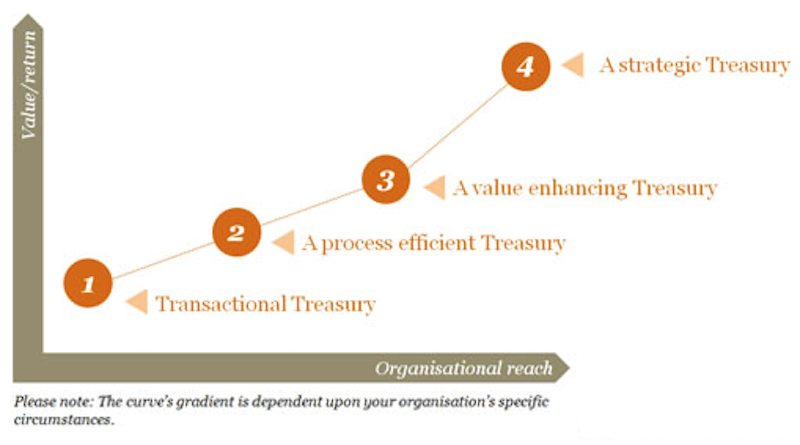 But the evidence from corporate treasury departments and three recent studies on corporate treasury practises and benchmarks showed that most treasuries are just lining up the next most important / urgent project, as they cope with day-to-day business pressures.

The three very different surveys - from PwC*, Reval**, and JPM*** - showed that, inevitably, corporate treasury has evolved since the 2008 crash, as it has both become more strategic, e.g. becoming much more involved at board level, and, at the same time, become more operational as it became increasingly involved in operational payment processing, working capital management, trade finance and commodity risk management.

There were no surprises in the main corporate treasury concerns and focuses in 2014 revealed by these surveys, namely:

The main events in 2014 listed by banks varied depending on their focus and location.

Alex Manson, Group Head of Transaction Banking, Standard Chartered Bank felt that the main event in 2014 was, “The remarkable pace of developments in the RMB space, opening a range of possibilities for clients – from sweeping in SFTZ earlier in the year, later opening out to pan-China, and Stock Connect going live in November.” While Jennifer Boussuge, head of Global Transaction Services, EMEA at Bank of America Merrill Lynch took a wider view, “In 2014, we’ve seen economic sentiment steadily improve, as corporations put their cash to work expanding overseas. At the same time, geopolitical uncertainty in key growth markets has tested risk management and treasury, two functions which have become increasingly intertwined.”