Almost half of British businesses are not actively managing their currency risks, despite the devaluation of sterling having a negative impact on sales margins for many. A survey by the British Chambers of Commerce (BCC) and Moneycorp found that 45 per cent of businesses (from a sample group of about 1,500) are not taking action to hedge currency risk. This is despite the finding that the weakened sterling exchange rate is having a negative impact on domestic sales margins of almost half the businesses in the survey.

Of the 55 per cent that do manage currency risk, 32 per cent are invoicing in sterling instead of local foreign currencies and 16 per cent said they have opened a foreign currency bank account to deal with sales and purchases in the same currency. The graph below gives more detail: 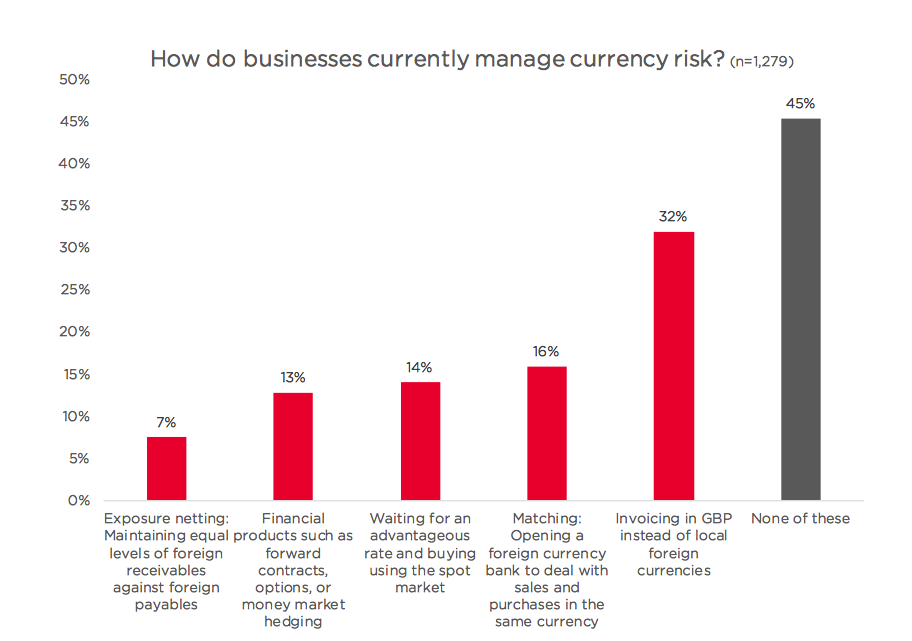 The International Trade Survey gathered responses from 1,500 businesspeople at the end of 2016, to gauge how the devaluation of sterling in 2016 has affected business. Most of the respondents were SMEs and 80 per cent sell products or services overseas.

The key findings of the survey were:

Adam Marshall, director general at the BCC, said: “The depreciation of Sterling in recent months has been the main tangible impact that firms have had to grapple with since the EU referendum vote. Our research shows that the falling pound has been a double-edged sword for many UK businesses.”

Moneycorp's Lee McDarby said: “The post referendum fall in sterling has clearly had an impact on many UK businesses and, as hedging begins to expire, importers and exporters will have to adapt to the new landscape.”

CTMfile take: As was mentioned by Lee McDarby in the BCC/Moneycorp's statement on this survey's findings, the process of going through Article50 and leaving the EU is going to take two years and companies with a sterling exposure need to start managing this properly. Preparing for further currency uncertainty would be wise.