Business must address the concerns of cautious investors if they're to attract long-term investment – and investors see cybersecurity as a priority investment area, while CEOs focus more widely. Investors see cyber attacks as the biggest threat to business, according to PwC's Global Investor Survey 2018, which found that two out of five investors and analysts surveyed this year are extremely concerned about cyber threats. It is now the number one risk to business according to the survey's investor respondents – while last year the threat from cyber attack was at fifth place. The report compares views from investors and analysts with the views of business leaders and found that the latter also see cyber attacks as a top threat – 40 per cent of business leaders said it was a top three risk. However, business leaders ranked over-regulation and terrorism as greater risks to business. 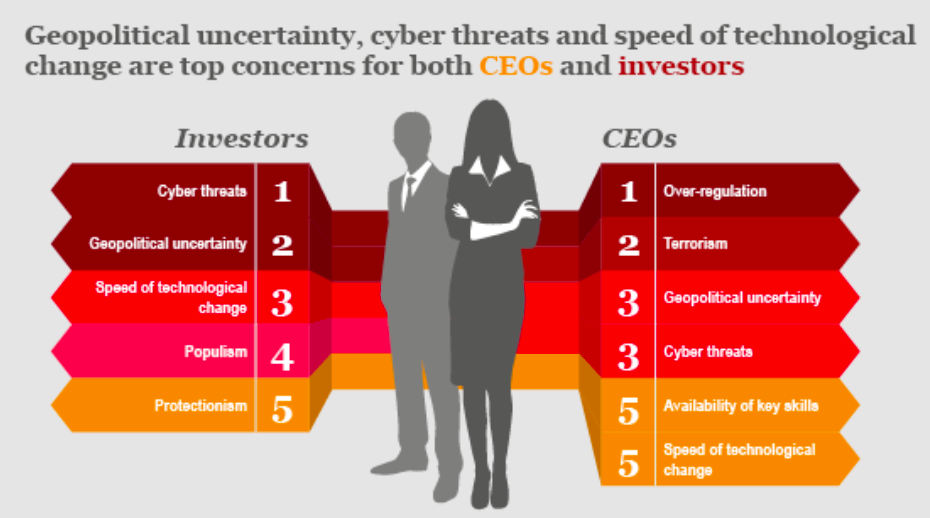 And while investors seem to see greater urgency in protecting business from cyber attacks, they are also less confident than CEOs about economic prospects in the coming 12 months. Fewer than a quarter (23 per cent) are very confident about 12 month growth, compared with 42 per cent of CEOs. Over the next three years, only one in five of investors are very confident about revenue growth, compared with 45 per cent of business leaders. Some of the factors influencing the investors' less optimistic views on economic growth include higher expectations (compared to CEOs) of disruption from technology (85 per cent vs 64 per cent), customer behaviour (81 per cent vs 68 per cent) and distribution channels (76 per cent vs 60 per cent).

PwC's Hilary Eastman commented: “Investors expect disruption to have a bigger impact on business than CEOs, which might be affecting investor confidence in growth over the longer term. Effective communication between businesses and investors is key to addressing caution. If businesses can clearly demonstrate the actions they’re taking to combat investors’ concerns, they’re more likely to be able to attract long-term investment.”

Ongoing negotiations on the future relationship of Britain and the European Union (EU) is also having an impact on investor confidence in the UK. While the top five countries (US, China, Germany, UK and India) investors and CEOs consider important for growth remain the same in 2018, there is a bigger gap between Germany and the UK, with Brexit uncertainty likely to be impacting investors’ outlook. According to PwC's 2017 survey, last year the UK and Germany were both preferred by 32 per cent of investors. But this year Germany remains a favourite for 32 per cent of investors, in comparison with 21 per cent for the UK.

This item appears in the following sections:
Financing

How to prepare your company for Brexit