Top finance executives at global enterprises are finally feeling optimistic about their companies' growth, according to the 2017 Global Business & Spending Outlook, by American Express & Institutional Investor. The survey asked CEOs, CFOs, treasurers and other financial executives for their views on the global economy and the role of the finance function in the complex and competitive business world. It summed up the overall sentiment as follows: “After years of belt-tightening, many companies worldwide are slowly shifting into growth mode, while still carefully managing expenditures to protect the bottom line, improve profitability and remain competitive.” Financial executives are also gaining influence according to the study, which found that the CFO's influence is “ascending to a new high”.

The expectations in North America and Asia-Pacific were described as “exceptionally robust”, while the outlook in Europe and Latin America was less buoyant, being described as “flat-to-negative”. So it seems that companies, particularly in North American and Asia-Pacific, are now thinking positively about investing. The survey report stated: “Companies are ready to set aside the “do more with less” mandate that they have applied to administrative and support functions during several years of post-recession retrenchment; they now appear poised to apply more resources to back office functions and support activities, with an eye to gaining efficiencies.”

The graph below shows the percentage of the survey's respondents that predict “substantial economic expansion” in 2017, in each region. Of note is that almost 70 per cent of North American executives predicted substantial economic expansion, compared with around 12 per cent in Europe. A natural conclusion would be that events in those regions in the past 12 months have had a profound effect on how financial executives view their company's growth prospects. The report stated: “The impact of the Brexit vote is weighing particularly heavily in the UK: the percentage of respondents in the UK anticipating economic expansion in 2017 stands at only 33 per cent – down 42 percentage points from last year.” The survey was done in the first quarter of 2017 and the elections in France and the Netherlands, as well as in Germany in September, are also factors that are adding uncertainty and dampening outlooks across Europe. 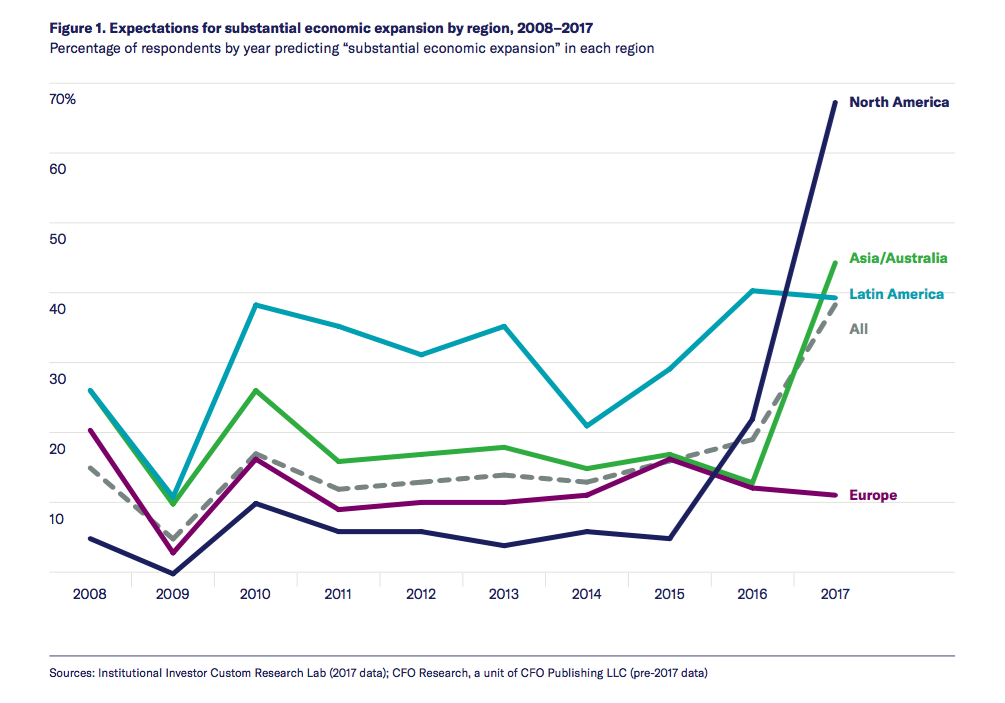 The research also found that remaining competitive is one of the key business priorities for 2017, followed by 'better meeting customer needs' and 'entering new markets'. Financial considerations such as 'improving market cap or stock price' and 'improving financial returns to owners/shareholders' come after the top three business goals. 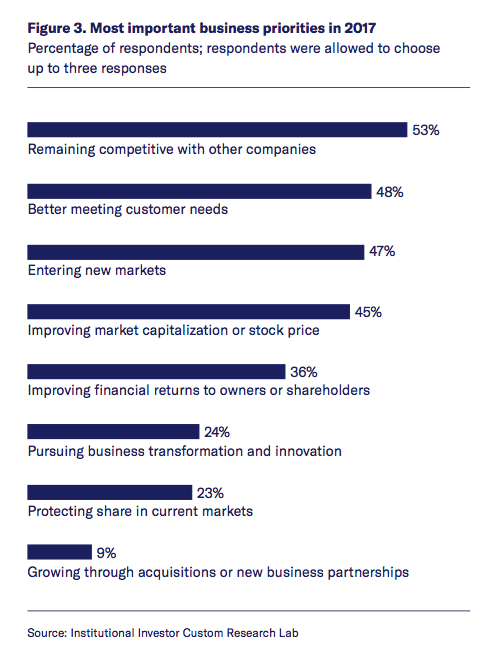 Brexit confusion could mean a smaller breakfast for Brits