The IPFA (International Payments Framework Association) was set up in February 2010 with the aim of improving and simplifying non-urgent cross-border credit transfers by defining rules, standards and an operating framework. They are leveraging existing payment networks and international standards, e.g. ISO 20022, which will enable payments between domestic and regional non-urgent payments systems and banks. (See Figure.) 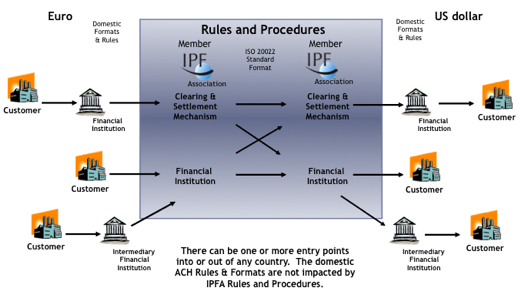 The vital difference from other payment standards initiatives is that the IPFA members are actually developing services. The Federal Reserve Bank at Atlanta, USA and Equens in Europe, have been processing US dollar and euro payments between the USA and Europe, since October 2010 (See Figure.). The target is to credit the beneficiary on Day +2 with a guarantee of Day+3. The clearing route, for example, for USD payments from the US to Europe runs from the originator to his US based bank, to the FED, to Equens, to the Europe based bank to the receiver. Settlement is done through DZ BANK in Europe and it's correspondent bank in the US.

Transactions from Europe have access to accounts of all US banks, and transactions from the US to Europe have access to accounts at all the banks in 22 European countries. On average monthly up to 8,000 payments have been processed in 2011. The charges are a matter for the FED and Equens, but are understood to be much cheaper than many alternatives.

IPFA currently has 35 members world-wide including several payment processors. The membership is expanding, and IPFA has also signed a cooperation agreement with Earthport a corporate operating in over 45 countries that have already agreed to implement these processes. Furthermore, IPFA has nine observer members from overseers such as Central Banks, the World Bank, the European Payments Council and others.

The IPFA services are available not only for US Dollar and Euro, but also for British Pounds, Swiss Franc since 2010. In 2011 the South African Rand, the Brazil Rial and the Canadian Dollar were added, and four new currencies will be added in 2012, including the Australian Dollar.

The IPFA and their work are probably the most important initiative today in actually delivering simplified non-urgent cross-border credit transfer processes and cost reductions.