The culture of late payment to UK SMEs is undermining their growth and the value they bring to the UK economy. Findings* from business finance company MarketInvoice reveal in Late Payments Insights 2017 report that 62% of invoices issued by UK SMEs in 2017 (worth over £21b) were paid late, up from 60% in 2016.

Overall, the average value of these invoices was £51,826 and three in ten invoices paid late took longer than two weeks from the agreed date to settle, with some taking almost 6 months to be paid. The research analysed which sectors, UK regions and countries were the worst late payers to UK SMEs.

Sectors were assessed on proportion of invoices paid late and how late, on average, these invoices were actually settled. Sectors that frequently pay late included the food & beverage industry (83%), energy businesses (80%) and wholesalers (79%). Meanwhile, those who took the longest to pay included transport businesses (25 days), utilities (23 days) and those in media sector (21 days).

Businesses in Northern Ireland, taking the mantle from Yorkshire in 2016, were found to be the worst late payers with 93% of invoices paid late. East Anglia (68%) and East Midlands (66%) came in second and third respectively. Scotland was the best of the worst, where half (53%) of invoices were settled late.

The research examined invoices sent to 93 countries. German companies were the worst late payers, taking an extra 28 days to settle invoices from agreed terms. French firms took a further 26 days and businesses in the USA 20 days.

While UK companies (66%) often pay invoices late, those in the USA (71%) and continental Europe (73%) are even more likely to delay payment. However, the UK still takes twice as long (18 days) to pay UK suppliers than counterparts in Europe (9 days). 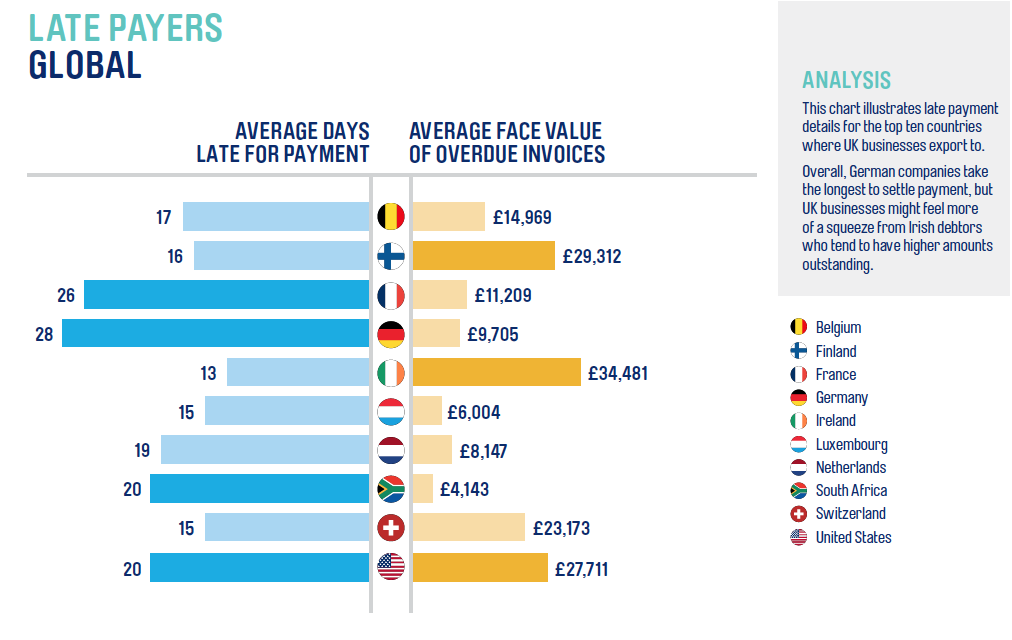 * Research conducted in November / December 2017 analysed 80,904 invoices raised by UK SMEs to a range of businesses across the UK and to 93 countries.

* * The 'duty to report' measures, which came into force earlier this year, require large businesses to report the average time taken to pay an invoice from date of receipt, the percentage of invoices paid in 30 days or fewer, and the proportion of invoices that are not paid within agreed terms.

Late payments increase in US, Canada, Brazil and Mexico

These statistics are indeed apalling. Companies should look at AR securitization or factoring programmes to see if these can provide a solution.