A survey by AT Kearney – Adapting to disruption – has highlighted the double-edged nature of technology in business. Cybersecurity is the top operational challenge according to a survey of global c-suite executives, while a positive technological disruption in their sector is also seen as one of the top external environment opportunities. The survey also found that the executives are focused on political risk and global executives anticipate that populist politicians will gain more ground in countries around the world this year and that Brexit will continue to heighten tensions within Europe. However, they also expect geopolitical tensions between great powers to decrease over the next 12 months but say that the unstable geopolitical environment is the top external challenge. Deteriorating regulatory and tax policies are also a secondary external challenge. Businesses are also reacting to aspects of globalisation, which is at risk from rising populism and protectionism. They majority of executives surveyed said that business strategies based on globalisation are still viable but that they are shifting their supply chains and international footprints. Almost all the executives said they are using strategic foresight tools, particularly scenario planning, to assess future risks.

These are some of the key insights from the study: 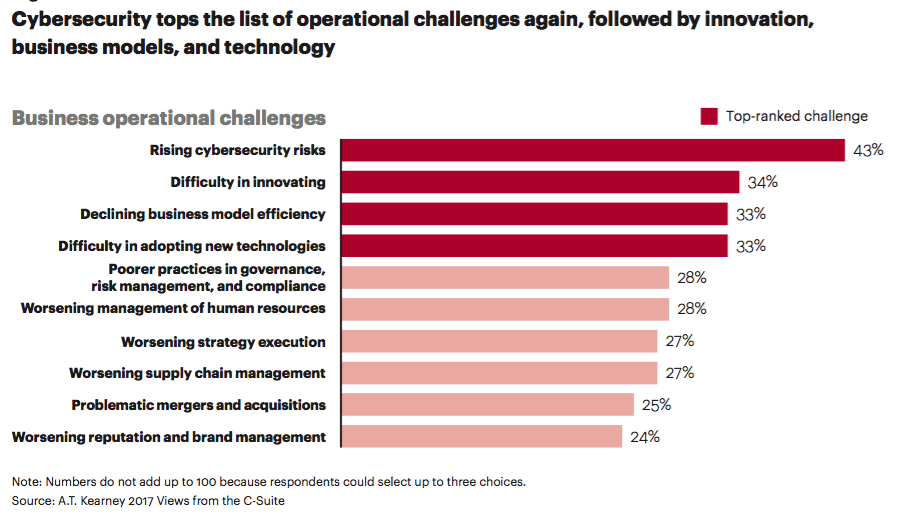 CTMfile take: This survey has some important messages for those in treasury, including CFOs: one is don't underestimate the risk of a cyberattack and invest in your defence systems (both IT and human). Companies also need to assess the geopolitical situation carefully when considering their global strategies and supply chains.

Cybersecurity is neglected by most companies in annual reports

Cybersecurity performance can be managed, but only if measured