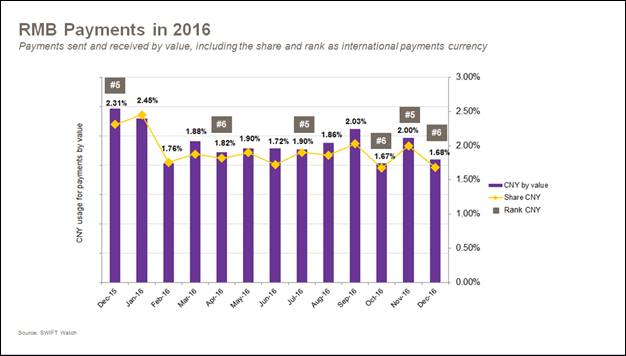 “The decrease in RMB usage for payments in December may be attributed to a convergence of several events: the slowdown of the Chinese economy, the volatility of the RMB exchange rate and regulatory measures on capital outflows,” says Michael Moon, Head of Payments Markets, APAC, SWIFT. “Despite the slowdown, RMB internationalisation will continue to benefit from major financial infrastructure milestones, such as CIPS for cross-border clearing and additional RMB offshore clearing centres. These efforts, combined with a Memorandum of Understanding that was signed in 2016 between CIPS and SWIFT to grow payments traffic outside of China, will have a positive impact on the continued internationalisation of the currency.”

CTMfile take: The internationalisation of the RMB will continue, but the big question is, “Will the slowdown in the Chinese economy combine with the madness coming out of the Trump Whitehouse produce another financial crisis and/or a climate change calamity?”

RMB has now become one of most traded currencies, says BIS