Overall, RMB payments value decreased by 0.68% compared to June 2016, whilst in general all payments currencies decreased by 10.08%. 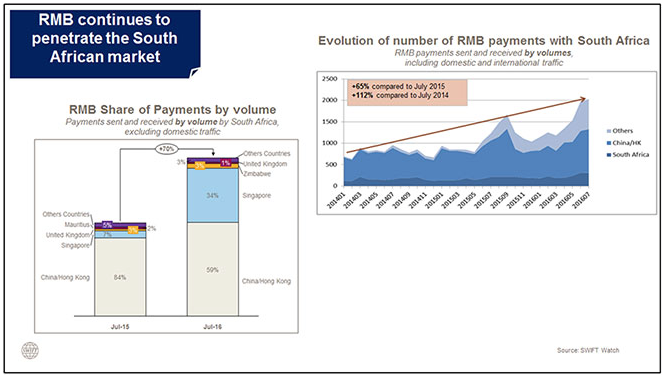 Excluding domestic traffic, RMB payment messages increased in volume by 70% in the last 12 months. In addition, nearly 40% of RMB payments by South African institutions have been offshore payments exchanged with countries other than mainland China and Hong Kong, compared to 16% in July 2015.

"South Africa has experienced a major shift in RMB growth over the last two years, strengthening the country's trade relations with mainland China and Hong Kong," says Harry Newman, Head of Banking, SWIFT. "The establishment of an RMB clearing centre in South Africa in July 2015, as well as Singapore's increased use of the RMB for payments with South Africa, have been a catalyst for RMB growth in the region."

CTMfile take: The RMB continues its inexorable path to becoming a Reserve Currency, but does the overall decline in all payments currencies volume on SWIFT indicate a global recession is here? coming?