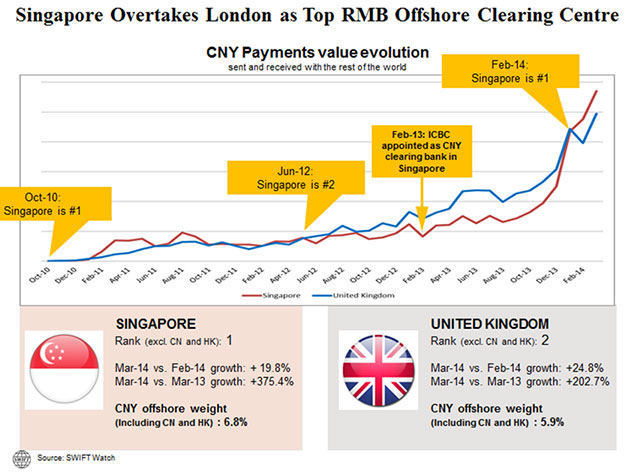 Claus Kwon, Head of Securities Markets, Asia Pacific, at SWIFT says: "Ever since last year's nomination of ICBC as a clearing bank in Singapore, we have been expecting the Singapore RMB payments flows to accelerate, especially as Chinese companies use it as a hub to reach ASEAN countries. We are now anticipating securities traffic to ramp up as well. In April, the Monetary Authority of Singapore indicated in a speech  that they are now looking to expand from a strong base in trade financing to developing a broader range of RMB investment offerings, particularly in capital markets and asset management."

Mr. Kwon adds: "The United Kingdom and Singapore appear to be taking a collaborative approach to serve RMB internationalisation. For example, this past February, the UK and Singapore governments announced the new UK-Singapore Financial Dialogue, a private sector forum designed to boost the development of the offshore Renminbi market."