We are starting to see a revolution in the buying/paying habits of European consumers, as they increasingly adopt the subscription payment model. (See CTMfile review of the SlimPay & Innopay report, Europeans and the Subscription Model viewed from a payment perspective.) The growing acceptance of recurring subscription payments across all countries is opening up new markets:

Number of monthly subscriptions per person /country in Europe

Usage of subscriptions per expenditure (global)

But these new markets will only be opened up IF: the recurring payment services are easy to use (frictionless) and protect the security concerns of both consumers and businesses. There are now a growing number of dedicated pan-European payment services for the recurring payments and subscriptions market. An important example is the SlimPay service which is taking an increasing share of the European subscriptions market.

SlimPay is a pan-Europe subscription payment service covering 35 countries for collecting consumer-to-business recurring payments. It is already used by 2,000+ merchants across Europe which range from the very large, e.g. EDF, tripadvisor, to SMEs throughout the region. Basically, SlimPay provides a smart recurring payments gateway based on direct debit, which offers three basic services:

The chart below shows how the three services come together: 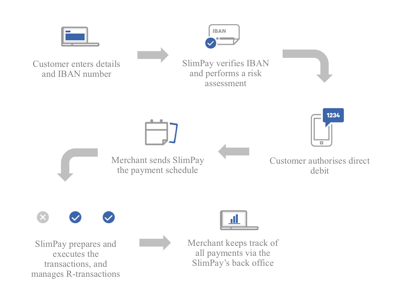 SlimPay also provide a ‘Re-submit Direct Debit’ service for consumers who had no funds available when the first direct debit was submitted. This is a three step process :

Initially, SlimPay the mandate management service was sold as a stand-alone product to large corporates because the banks did not have such a service. Today some companies taking only mandate signature service while others are using all three options.

Also some banks have taken the SlimPay service for their DD mandate management.

Charges are based upon the number of transactions per month.

The traditional recurring payment markets, e.g. mortgage, energy are vitally important and will continue for ever. However, it is the new markets that are being opened up by the frictionless direct debit services that is exciting companies, e.g.:

In opening up these new markets Slimpay have found that the key is to:

However, subscription payments are not limited to Europe, already SlimPay has a foothold in the US market with their partnership with the subscription giant Zuora.

CTMfile take: Cashflow from subscription payments is the best kind: predictable and regular. Opening new markets with recurring payments is a dream that could come true.