Payments between UK and Hong Kong/China

SWIFT data also shows that 40% of all payments made between United Kingdom and China/Hong Kong are exchanged in RMB. The Chinese currency is by far the most used in this corridor, followed by the Hong Kong dollar (24%) and the British pound (12%).

“Since the China Construction Bank (London branch) became a clearing bank in the United Kingdom in June 2014, there has been a steady growth of RMB payments between the United Kingdom and China/Hong Kong,” says Stephen Gilderdale, Managing Director, UK, Ireland & Nordics at SWIFT. “Offshore RMB clearing centres are driving greater use of the currency in global trade, and countries such as the United Kingdom, are reaping the benefits.”

In March 2016, the RMB remained stable in its position as the fifth most active currency for global payments by value with a share of 1.88%, a slight increase from 1.74% in February 2016. Overall, RMB payments value increased by 18.46% compared to February 2016, whilst in general all payments currencies increased by 10.67%, see figure. 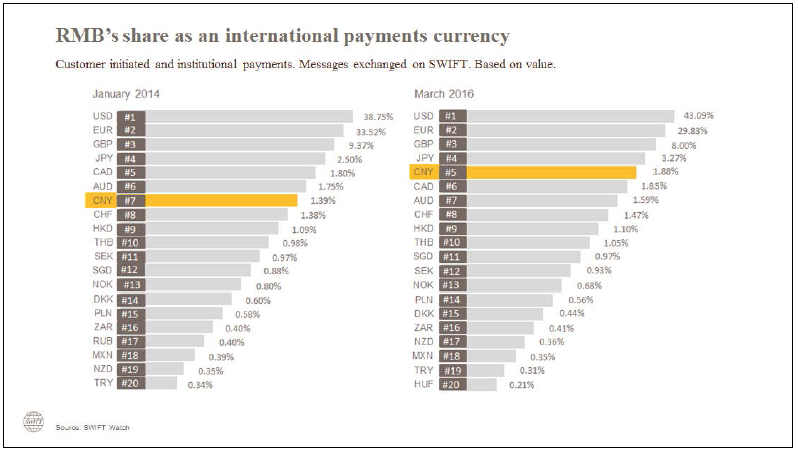