Working with issuers across Europe, FICO has seen big changes in the fraud landscape. These changes are illustrated by new data from Euromonitor International, which show how different countries’ defences against fraud, their adoption of powerful analytics and their use of EMV technology, have pushed criminals from one country to the next and from one form of attack to another, as figure below shows: 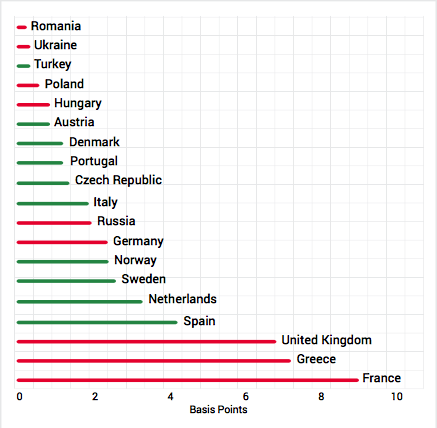 (Red lines indicate countries where the card fraud rose from 2013 to 2014, green lines where it decreased.)
Source & Copyright©2015 - FICO

Overall card fraud in 19 countries in Europe  Europe rose an average of 6% in 2014. But the low overall rise masks large shifts in so-called “cross-border” fraud, where criminals use data on cards from one country to commit fraudulent transactions in another country.

Cunterfeir card threat, which was a major threat 10 years ago, has declined to 10% of all. But CNP fraud remains a major challenge and represents 54% of all card fraud. Although it is now increasing at a much low rate, but FICO believe that it is not fully under control.

In the UK, FICO has identified a 25% increase in cross-border fraud on debit cards in 2014, compared to 2013. More importantly, it identified that 47% of the fraudulent transactions were taking place in the US — a pattern that, again, seems related to the delay in EMV adoption in the US.

CTMfile take: The sooner the USA adopts EMV chips and protocols the better. But many in USA merchants have no plans to adopt EMV ever.