Corporate executives are increasingly turning to treasury and the CFO for advice on strategic business decisions, including where to locate operations. This was mentioned in this CTMfile article yesterday on the impact of Nafta and peso volatility. The impact of global FX fluctuations, changing tax or tariff rules and price inflation are all prime considerations when a company is looking to expand or reshape its global operations, or even if it's looking to set up a regional treasury hub or payments factory, for example. For strategically-minded corporate treasurers, it's worth noting a report from PwC, which identifies three emerging markets that are set to outperform their neighbours over the next five years.

February's edition of Global Economy Watch looked at how Poland, Vietnam and Colombia are improving their economic models through foreign direct investment (FDI) and infrastructure programmes. One of PwC's senior economists, Barret Kupelian, said: “We think that there are other smaller but equally appealing economies – what we call the ‘pockets of opportunity’ – businesses should consider when thinking of expanding their international footprint.”

Vietnam has negotiated a trade deal with the European Union and so could develop into a manufacturing hub in the future. There is tangible evidence that Vietnam is using FDI to move its economy away from a high-volume, low-cost base to a more high value-added focus, with mobile phones now being its largest export as opposed to commodities.

Poland has access to the Single Market and one of the most liberal FDI regimes of richer economies. It also has relatively low labour costs - for example the hourly cost of labour in Poland was €8.60 in 2015 which was significantly below the EU average of €25 per hour. These two factors, along with its central location within the broader European continent, have helped Poland attract FDI, with the total stock now around $200 billion or around 50% of its GDP.

Colombia has embarked on a radical $70 billion infrastructure programme that will boost the design and construction industries. Colombia is a mid-sized economy that is well poised to grow in the short to medium term. The stabilisation or, in some cases, increases in commodity prices over the past year and the depreciation of the Colombian peso mean that its external adjustment is largely complete. 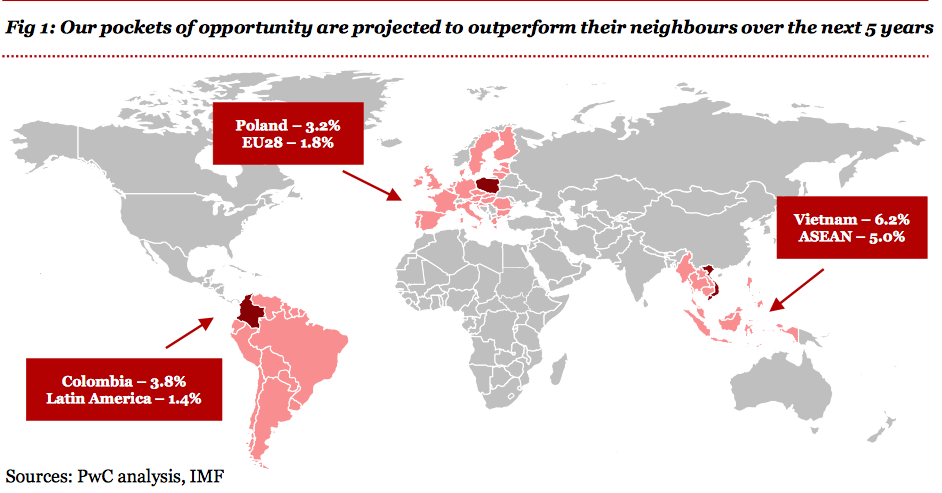 In its World in 2050 report, PwC also predicted that six out of the seven largest emerging economies (the E7, which comprises China, India, Brazil, Mexico, Russia, Indonesia and Turkey) will be in the top seven biggest global economies by 2050 (see CTMfile report here).

US will lose global economic dominance by 2050 - PwC

Weaknesses in financial systems are holding emerging markets back

BIS view on why FX markets are shrinking