Philipp Schönbucher, Chief Data Scientist, Previse who has spent many years in machine learning* (ML) explains how Previse is able to pay ALL suppliers instantly as shown in its chart on Supply Chain Finance 2.0 below. 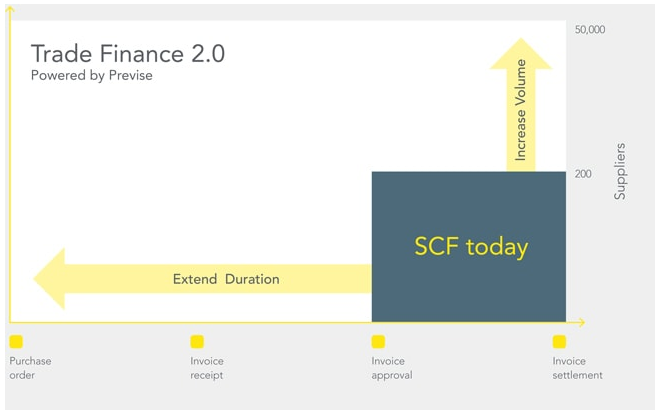 Starts with the SME’s invoice

An invoice from a small, credit-challenged supplier may be a terrible supplier risk, but it could have a very high probability of being settled if the buyer is a highly rated, multinational corporate buyer. In this case, the invoice is a very attractive risk for financing the supplier. Here the important question is “What is the buyer’s likelihood to settle the invoice?” Rather than the SME supplier’s credit risk, assessing this opportunity requires, however, the ability to accurately measure the probability that a given invoice will be settled by the buyer. This can be done by leveraging the data in the ERP systems of the large corporate buyers and training a state-of-the-art ML-based scoring algorithm on it. This algorithm produces a “probability of settlement” for any invoice, without any limitations to scale or scope.

Previse has developed a machine learning algorithm which learns by recognising patterns in the data and reducing that to a form which is able to predict the probable behaviour, e.g. for each supplier which invoice data subset is disputed and which is not disputed, etc. The machine learns the pattern and all the features of each supplier’s invoices, so when the machine is presented with a new invoice it is able to predict the future of the invoice using a highly accurate, probabilistic scoring system. Schönbucher explains that “Today we are now able to handle the vast amounts of ERP data to carry out this analysis and so predict the likely behaviour of an invoice.”

Previse builds a holistic statistical picture of each supplier relationship. It not only predicts disputes but also predicts the ability to recover invoices, e.g. a travel agent who typically only gets paid for 80% of the invoices submitted because 20% of trips are cancelled or rescheduled.

For a large buyer with 1000s of suppliers, Previse’s analysis will show probabilistically which invoices are less likely to be paid so that the rest can be funded instantly.

Previse sees its job as being to significantly accelerate the process of paying suppliers to the day a supplier delivers its invoice. The factual checks, e.g. have goods been ordered, arrived, and are up to specification etc. can then be done in the background by the corporate in line with its normal payment processes.

Previse can also recommend where there is a need to check an invoice in more detail because the supplier or the type of transactions has had more problems in the past than others, e.g. checking the freshness of foods is different from checking pencils. This allows companies to move towards a more data-driven operating and more stable process model.

Previse is not a payments company, however. It works with funders, including banks and investors, which supply the cash to fund the invoices which Previse’s algorithms determine are highly likely to be paid. The buyer then repays the funder, plus a small interest rate, at a later date based on its usual payment terms and processes.

Previse is rolling out its solution worldwide. It is actively engaged with firms in multiple countries with pilots running in industries as diverse as healthcare, media, and finance. To support this global roll out the company already has offices in three continents.

* Schönbucher has a problem with term AI. He says that “The people who actually work with AI, prefer to call it machine-learning which is much less ambitious and a more realistic claim.”

CTMfile take: Previse’s approach could change the whole supply chain finance model. SCF 2.0 is truly a revolution and at the very least could dramatically change the workflow in the accounts payable department.

Some late payment practices in UK are despicable